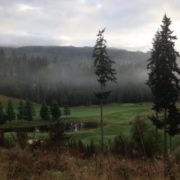 Fall has fallen. The rain is back and our season is winding down.

The greens on both courses were aerified two weeks ago and are healing nicely. My team and I completed core aerification, harvesting the cores, sand topdressing and dragging in the sand on our 41 greens in two days. The weather cooperated with nice sunny days and we were able to jump right on dragging in the sand as soon as we were done coring.

Our other fall projects include aerating the tees on the Cascade Course and mowing down the native areas on the Olympic Course.

In September we hosted the Husky Invitational on both courses for three days. I thought it went very well from our end although it didn’t go as great for the UW team, as I think they finished third. In May of 2015 we will host the NCAA Regional Championship on the Olympic Course, and the Huskies will have a chance to redeem themselves then!

On October 30th we are hosting our second annual Columbia Hospitality scramble tournament, and I hope to see everyone out for that! Last year we had pretty nice weather, and hopefully this year will be the same.