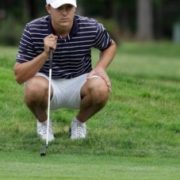 As we gear up for the U.S. Open week, I can’t help but think back to the USGA Junior Amateur we hosted in 2011. Little did we know our Junior Amateur Champion would go on to be the current #2 ranked player in the world, reigning Masters Champion, and one of the favorites going into the U.S. Open.

The field for the Junior Amateur was littered with great young players like Beau Hossler, Adam Ball, Jonah Texeira, and Will Starke to name a few. But the one that stood out to all of us was Jordan Spieth. Not just because of the way could hit a golf ball, but more of the way he carried himself. He was golf wise beyond his years, and the way he managed his way around the Olympic course was magical. I remember congratulating him in the clubhouse after his victory and thinking to myself that this young man was going to succeed at anything in life. He was sitting with his father and his caddie talking about his victory and enjoying the moment. There were a lot of interruptions from folks trying to shake his hand, and even ask for an autograph, but every interruption was met with a smile, a hand shake and some small talk from Jordan. Here was a young man after the biggest victory of his life taking time out for perfect strangers!

This is just one of the many reasons why I will be pulling for Jordan in this year’s U.S. Open, along with millions of other golf fans. Jordan is a breath of fresh air for the game of golf, and one little piece of history for Gold Mountain!